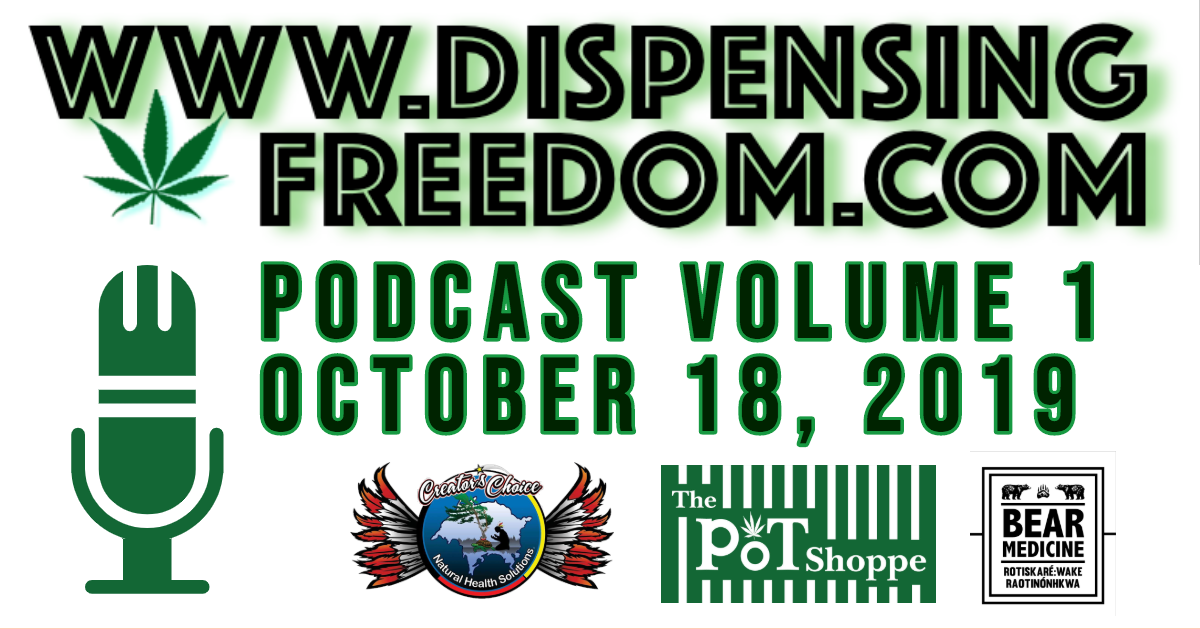 Dispensing Freedom is proud to announce that we’re launching our first weekly Podcast series providing you coverage of the Indigenous cannabis industry. Listen at the link above, or read the script below.

“Hello listeners, my name is Darryl Richardson, freelance reporter, and I’m Rez, an Ojibwe student in Toronto today is October 11, 2019 and welcome to the first edition of the weekly Dispensing Freedom podcast.
If you don’t know Dispensing Freedom is a media organization which focuses on the indigenous cannabis industry on the territory known as “Canada”. We’ve published one magazine already and we are working on our next volume right now. At dispensingfreedom.com you can find over 500 articles covering indigenous cannabis sourced from mainstream and independent sources as well as our own investigative reporters. We can also be found on Facebook or on Twitter @DispensingF. If you any news tips, questions or a piece of work you want to submit you can reach us at dispensingfreedom@gmail.com.

So what’s happening in the world of Indigenous cannabis this week?

We just came across a Facebook post from Rhonda Martin of Six Nations, a dispensary was raided there October 9th. Four people were arrested and police have exercised unnecessary excessive force. One of the arestees had their nose broken and had to be taken to hospital.

This is especially frustrating to the people of Six Nations as a number of properties seem to be able to sell hard drugs like meth and fentanyl with impunity. These raids are disruptive to the community and are harming the people who work there and their families. There is currently an estimated 6 – 10 dispensaries operating on Six Nations but they have all been ordered to operate without any advertising or signage. Compare that to Tyendinaga, where approximately 50 dispensaries operate in the open.

Raids like this continue to take place on reserves all across Ontario despite local governments attempts to introduce bylaws or regulate the cannabis industry themselves. Last month Creator’s Choice in Wahnapitae First Nation was raided by the Anishinabe Police Service despite their chief Larry Roque arriving on scene and attempting to stop the raid explaining to police that Wahnapitae Chief and Council are drafting bylaws and no enforcement action had been requested.

Sara Mainville, a lawyer from Olthius Kleer Townshend who has been working with both Wahnapitae and Tyendinaga to develop their cannabis laws recently told the CBC that “We definitely need the governments to see the writing on the wall … and allow First Nations the authority to control cannabis. That is the only way out of this quagmire.” Many current proposed by-laws such as those in Nippissing First Nation seem designed to force indigenous dispensaries to purchase their product from licensed producers and to operate under the Health Canada regime.

For their part the Ontario Provincial Police are toeing the line on enforcement. In response to questions about vape pens in Pikawakanagan First Nation the OPP sent the Ottawa Citizen a statement which reads in part “OPP-led Cannabis Enforcement teams are working closely with all partners, including the OPP Indigenous Policing Bureau (IPB), its Provincial Liaison Team (PLT) and First Nations Police to enforce the laws pertaining to illegal cannabis and to address concerns related to investigations or enforcement activities.” This is in contrast to earlier information coming out of an OPP-PJFCET PowerPoint that they will only raid First Nations dispensaries if requested by local band council.

Shifting over to the West Coast it looks like Nations Cannabis in Burns Lake is set to become the first licensed cannabis producer on a first nations territory in BC. Former Burns Lake First Nation Chief and Municipal Councillor Wesley Sam who is a co-founder of the 100% indigenous company told First Nations Drum. “We started the application process to acquire a standard cultivation license through Health Canada last August, through the Navigator program – which guides all applicants,” he said. “We are a late-stage applicant. We recently received word that a high-level review of the application has been completed. That’s a positive sign, indicating the application is moving through the process as planned and there are no areas of concern.” It sounds like things will be pushed through quickly for them.

There are currently three other bands across the country with cannabis production licence’s, Akwesasne Mohawk Territory, Opaskwayak Cree Nation and The Siksika Nation.

Many indigenous people, especially those operating their own unlicensed production facilities are worried about what this means for their business. It is the opinion of many that indigenous people have the absolute right to produce and trade in any medicine or commodity that they choose, including marijuana, without interference from the federal government.