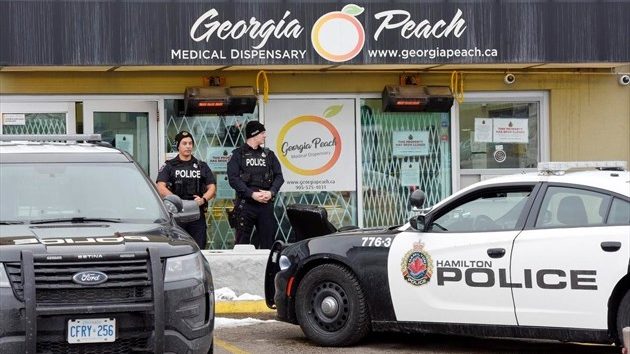 From thespec.com link to article by  Nicole O’Reilly April 5th 2019

More than half the illegal cannabis dispensaries targeted by a provincial task force have been in Hamilton.

“The majority of our work has been in Hamilton,” said Insp. Jim Walker, OPP deputy director of the central Organized Crime Enforcement Bureau.

“Hamilton had a high concentration for illegal cannabis stores — and still does.”

Of the 41 warrants executed provincially as of this week, 22 have been in Hamilton.

In all, 29 have been shuttered by OPP and Hamilton police here since legalization Oct. 17.

It used to be that raided dispensaries would pop back up, sometimes with a different name or different people, as soon as the next day. Police complained those charged would often get a “slap on the wrist” such as a peace bond.

But now with powers granted under new provincial legislation police are seizing the properties, changing the locks and installing security. They are not reopening.

When asked whether the team would estimate whether all the brick-and-mortar illegal shops will be closed in the next year or so, Walker replied “it’s going to be quicker.”

“We have a goal in mind,” he said, but would not say more.

Yet that wouldn’t mean police work is done — cannabis businesses have moved online, where they advertise deliveries and pop-up shops.

Police have not laid any organized crime charges in relation to dispensaries, Walker said, but it’s “an avenue we’re always exploring.”

This week, Premier Doug Ford called out Hamilton for not doing enough to close illegal pot shops here during an news conference. His comments were in response to a question about the rollout of legal stores — only 10 out of the 25 operators awarded licences in a lottery were ready to open by April 1.

“My biggest frustration, to be very frank, is Hamilton,” he said. “Last time I checked, they had 50-some-odd pot stores out there. Who’s doing anything about it?”

That 50 number was outdated. Hamilton police say there are still about a dozen illegal dispensaries left open here, dwindled down from a high of more than 80 at one point before legalization.

“The public needs to know there is a large amount of criminality behind these (illegal cannabis businesses) and a lot money,” Walker said.

They’ve seized bank machines that show stores made as much as $14,000 a day.

The investigations are not as simple as going and executing a warrant, he said. There are hundreds of exhibits that have to be painstakingly catalogued and stored.

But even once they’ve left the building, investigations don’t stop there. The much bigger task is investigating who is profiting, what else they do with that money and who is supplying the cannabis.

Walker said they have a “fairly good idea” where the suppliers are, but declined to say more.

The OPP task force approach has been to lay federal charges against the employees in store when the raid happens, often possessing cannabis for the purpose of selling.

This strategy was decided in consultation with Public Prosecution Service of Canada and other stakeholders, Walker said.

These cases will go through criminal court, including all the requirements to maintain evidence. It’s likely a longer process than provincial offences tickets, but one that Walker said is intentional because “these are serious offences.”

Not included on the task force is Toronto police, whose strategy has been slightly different in tackling dispensaries.

The service working in partnership with the City of Toronto’s municipal licensing and standards to shut down illegal dispensaries through provincial legislation, said Toronto police spokesperson Const. Caroline de Kloet.

Ontario’s Cannabis Control Act says a conviction for selling can result in a fine up to $250,000 or jail time of not more than two years less a day.

“This approach allows the TPS and the City of Toronto to effectively disrupt and close illegal dispensaries while continuing to devote the vast majority of drug enforcement to those involved in the illegal trafficking of narcotics that pose serious health risks for users, including fentanyl,” de Kloet said.

However, enforcement is also dependent on the circumstances of the case. If there is evidence of links to organized crime, Toronto police would “never rule out laying federal charges,” she said.

Toronto has laid federal charges in 2016, 2017 and 2018 in relation to illegal dispensaries “believed to be involved in sophisticated organized crime rings.”

Many of the officers on the provincial task force come from vice and drug units, but they possess a range of skillets, Walker said. They have also focused on training on how to conduct safe entries and search warrants.

The team has not required tactical officers for any searches. Most start with the officers calmly walking in the business.

But once inside, officers may face a range of situations.

Last week, while searching a dispensary at 303 James St. N. in Hamilton — a former bank location — police had to find a way to break into a bank vault to get to the cannabis.

What remains unclear is how the courts will deal with these charges.