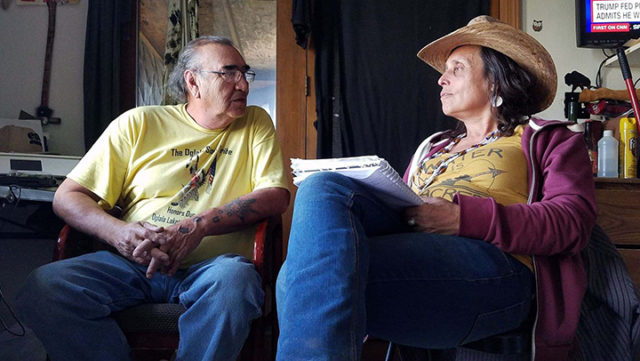 The Hemperer and the Governor

It’s twenty years since Alex White Plume planted his first hemp crop on Wounded Knee Creek, here on the Pine Ridge reservation. Spring has come, after a winter buried in epic snow storms, and the grass is greener than ever. It’s time to plant.

It’s 2019, and the Oglala Lakota are revisiting a plan to grow hemp on the reservation. Hemp has been a long standing interest of the Nation. That’s because it’s an incredibly versatile plant. It was also acknowledged in their 1868 Fort Laramie Treaty. While the 1998 Tribal Council industrial hemp ordinance remains intact, there’s been a lot of litigation over the past twenty years.

In 2019, the passage of the Farm Bill legalized hemp nationally, and the Oglalas are today reviewing an updated Hemp Regulatory Ordinance. And nationally, the industry may be ready – as CBD varieties, seed and fiber hemp flourish. What’s clear is that the Oglalas have paid ahead for their place in the hemp industry, and most of the world wants to see them succeed.

Continuing South Dakota’s decades behind politics, new Governor Kristi Noem vetoed industrial hemp production in the state in mid-March. That was after the bill had passed through the South Dakota legislature. As the Oglalas discuss hemp regulations, it’s clear the state and the Oglala Nation will be in conflict. That’s no surprise.

In the meantime, Wyoming’s governor signed the first state-level hemp law under the 2018 U.S. Farm Bill. Wyoming Rep. Bunky Loucks sponsored the legislation. The Republican representative had a message for South Dakota Gov. Kristi Noem: “Tell her I hope she vetoes it, because that would be good for Wyoming,” he said. The bill passed the Wyoming House 60-0, the Senate 26-3-1, and then the House again 56-3-1 after being amended in the Senate.

In late April I was able to visit with the Oglala Tribal Council in a meeting sponsored by Thunder Valley Community Development Corporation in Kyle, South Dakota. The Tribal Council is reviewing newly drafted hemp regulations, and spring fever is fragrant in the air. Individual farmers want to grow hemp – including a rancher with 50,000 acres on the reservation. There is good land for hemp on the reservation and it’s clear there are many national and international businesses keen on working with the Lakota to create more CBD and other enterprises on the reservation.

To be Free
Pine Ridge has its own time zone, economy and world. That’s my observation. Oglala Chief Mathew King once said, “the only thing sadder than an Indian who is not free, is an Indian who doesn’t remember what it was like to be free.” On Pine Ridge, the vast landscape, the endless sky, the horse nation and the people remind us of freedom. You can breathe it in.

That’s why hemp has such potential. In many ways it represents freedom. The plant grows well in Oglala territory. Just ask White Plume, whose field was seized by the Drug Enforcement Administration (DEA). Between 2000 and 2002, federal drug agents raided his farm and destroyed his crop of fiber hemp. That was before he could harvest it for seed. The DEA then secured a court order prohibiting him from growing hemp. White Plume couldn’t touch the plant.

The 8th US Circuit Court of Appeals later upheld the DEA action. The eight federal charges resulted in a long and expensive court battle for the White Plume family. White Plume had to sell prized horses to sustain the family. This past year, the ban on White Plume’s hemp farming ended. “For seventeen years, I’ve been on the sidelines, while people are becoming millionaires,” he told me. In other words, the Oglalas, who were planting two decades ago, are watching a non-Native cannabis market grow exponentially. Despite the regulatory challenges and domestic legal issues, the hemp industry grew by 16% in 2017 (Hemp Business Journal 2018).

The times are changing
Ironically, with the seizure of the crop, the DEA essentially reseeded much of White Plume’s land with hemp seed. They don’t call it weed for nothing. The plant loves to grow. In other words, Oglala territory is hemp territory.

The potential of building a set of value added businesses with hemp on the reservation is great, from local growers, a cooperative to local processing of CBDs, hurd and fiber products. That’s all a part of the original dream of White Plume. We call him the Hemperer. “The plant takes in bad air and breathes out fresh air. It’s mold free,” he tells me.

The White Plume family’s battle with the DEA to defend their treaty-guaranteed-right to grow hemp was a huge court battle, a story told in Silent Standing Nation, a documentary.
The dreams of White Plume Hemp LLC (which incidentally is a state of South Dakota registered corporation), include a hemp industrial park full of diversified local hemp businesses and processing centers for tribal growers. That vision, White Plume explains, includes dehulling hemp seeds (that’s for hemp hearts), extraction of CBDs, decordicating and value added fiber and hurd production. That model is likely replicable and affirms a local, regenerative economy.

Lessons to be Shared
Learning from the Oglalas is an opportunity for all of us. As Phillip White Man, from Northern Cheyenne, explained to me, “the next economy is about cooperation, not competition.” The fact is that hemp needs to be grown widely, to change the economy – whether the medical economy, the textile economy, or the plastics economy – it will take a lot of growers. Let’s be absolutely honest, we have to move past fossil fuels, including all those plastics. Otherwise, we are going to be fighting oil pipelines for the next twenty years. Anything you can make out of plastic, you can make out of hemp.

There’s much to learn. For instance, CBD plants (all females) require a different life than fiber and seed hemp. And, since those plants are all female, they need to live by themselves, sort of like a village of women. I think of them as Divas. They love to be special. And growers need to watch for cross contamination, or male plants. One boy can mess up the whole group. That’s not surprising. It’s a careful farming balance.

Some tribes are looking at producing CBD plants for commercial CBD producers, offers coming in at $500 an acre, which seems especially lucrative. In the present bubble market of CBDs, high quality organic CBD plants are worth much more an acre – at least l00 times that, with the right partner and the right processing. That’s part of what we can learn by working together.

We can also learn about creating the next economy. Cannabis as a plant has a magical ability to not only heal, but to replace most petroleum bi products and a good deal of clearcutting for papers and lumber industries. Hemp’s tensile strength is twice that of cotton, approximately 80,000 pounds per square inch, but unlike cotton, it requires little or no pesticides. Hemp is still grown for paper production and hemp paper lasts three times longer than paper made from wood and does not yellow as it ages (Evaluating the Public Interest: Regulation of Industrial Hemp under the Controlled Substances Act by Christine Kolosov, 2009). It’s also about how we relate to the plant. “The plant is not a slave”, that’s what our elders would say.

Intertribal Hemp Collaborations
This year, the sixth annual Colorado NOCO Hemp Expo included more Indigenous hemp growers than ever. NOCO followed an Indigenous Hemp Conference, held for the second year in a row, on the White Earth reservation. At both conferences, delegations from the Navajo, Pine Ridge, White Earth, Menominee, and Colville Tribes continued to share information about the evolution of tribal hemp policy and the plans for each nation’s hemp development. Everyone recognizes the potential for the plant. “We will be at the table, not on the menu,” one grower told us.

Olowan Martinez, from Pine Ridge, talked about the Wasichu (“fat takers”, a term used by the Sioux people to describe the white man) at NOCO. “We don’t want this to be the same in the next economy, the hemp economy,” she explained. “We are hoping to build right relationships.” Indeed, with large land based tribes at the table, the renaissance of the hemp economy, particularly the textile, insulation and construction industry, has great potential for Native farmers.

Part of what is going to be key in the upcoming year is tribal regulation of hemp. The new Oglala regulations under review are conservative. There are a lot of regulatory check offs. The 40-page policy paper is daunting and thorough. The last Oglala policy was four pages. Other Nations are pushing the boundaries with the help of sophisticated legal counsel. There’s plenty of Cannabis lawyers out there these days because the industry is worth about $10 billion and has 250,000 employees. Not bad for a few years out of the cradleboard.

Spring is here. While South Dakota sits once again on the sidelines, the rest of the country is moving towards hemp and the next economy. “Hemperer” Alex White Plume is going to watch South Dakota squirm from his hill top overlooking Wounded Knee Creek. He’s planning for seven generations from now. He’s planning the hemp renaissance. It’s clear the Oglalas are ready.