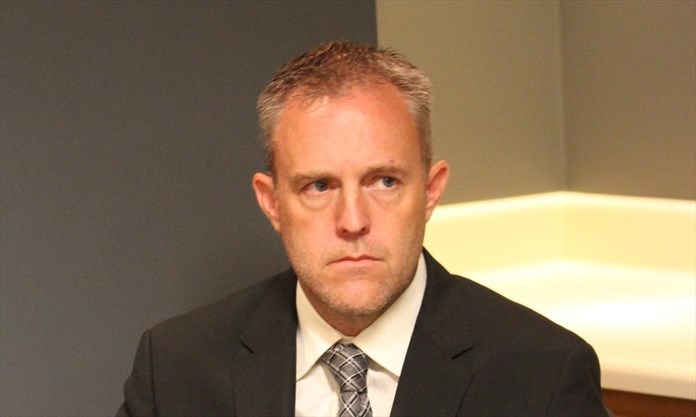 This Durham cop intentionally misled bosses about his unlicensed marijuana dispensary, the OPP concluded. He has never faced discipline

An unlicensed weed shop, the Lamborghini-driving cop who co-owned it and the “misconduct” that has gone unpunished. Inside the case that prompted Durham police to call in an outside force.

Edgar never faced discipline from his bosses at the Durham Regional Police Service.

Durham police would not say why it did not pursue disciplinary charges against Edgar. The police service, which patrols the region east of Toronto, including the cities of Oshawa and Pickering, will also not comment on what it calls a personnel matter.

The force’s handling of Edgar’s case is part of a mounting pile of allegations before the Ontario Civilian Police Commission, which is reviewing complaints by several Durham police employees accusing senior command of corruption, abuse of power and coverup. Durham police say the allegations are false and defamatory, lobbed by disgruntled employees with axes to grind.

The OPP investigators determined that early on in the secondary-employment approval process, Durham police should have denied Edgar’s November 2015 request to own a medical marijuana dispensary.

In approving it, Durham police failed to do basic due diligence, including verifying whether Edgar’s company had been licensed to sell medical marijuana as he claimed, the OPP concluded.

“Const. Edgar was deceitful throughout the approval process,” OPP officers wrote in an investigative report for Durham police. Edgar’s superiors were aware as of June 2016 that the dispensary did not have a licence but had not initiated disciplinary charges, the report said.

Reached by phone, Edgar was surprisedwhen told OPP investigators concluded that he had committed deceit and discreditable conduct, saying it was the first he had heard of it.

“Then charge me. That’s why we have a process. I have done absolutely nothing wrong,” Edgar said. “Deceit is a very powerful word. If somebody is going to make an allegation of that then they better be able to prove it because it’s not something that I would take lying down.”

Edgar’s dispensary’s website offered consumers pot brownies, a weed-infused chocolate hazelnut spread called “Chrontella” and other edible products that at the time were illegal to sell, a 2016 Star investigation found. After the Star began asking questions, Edgar stepped away from the business, which he says never sold any marijuana products before shutting down.

The OPP report says its investigators were instructed to see if Durham’s secondary-employment process had been properly followed in Edgar’s case and to flag any “conduct issues” to Durham police to investigate. The final report was given to Durham police in September 2017.

A year earlier, while the investigation was still ongoing, the OPP repeatedly informed Durham’s then deputy chief Uday Jaswal that it had identified “misconduct” by Edgar, the report said.

Jaswal responded by saying Durham police were going to ask another “external” agency to investigate if Edgar had breached the Police Services Act. In an email quoted in the report, Jaswal, now a deputy chief with Ottawa police, called the OPP’s investigation a “process review” of Durham’s secondary-employment system and thanked the force for its work.

Durham police has refused to say which other agency was given the investigation and whether it has concluded.

When asked why the OPP’s findings did not lead to disciplinary action against Edgar, a lawyer representing senior Durham police officials said it’s wrong to assume all investigations end with charges being laid.

“As a general matter, the fact that a member of a police service has not been charged with misconduct under the Police Services Act does not establish that something has been ‘buried,'” lawyer Sean Dewart said in a written response to questions from the Star.

Insp. Rene Bazinet, who led the OPP’s investigation, said he could not comment on the case as it was done at the request of Durham police.

“All I can tell you is that we completed our investigation and we did have a report, and we handed it off to Durham region … The chief is in possession of it,” Bazinet said. “They have the findings and they’ll address them.”

Edgar has been a Durham officer for more than 20 years, saying he has stuck with policing because of a passion for the work, not for the paycheque. He also owns a gas station on the Mississaugas of Scugog Island First Nation, of which Edgar is a member.

He lives nearby in a palatial home nestled along Lake Scugog, the product of what he described as “years of smart investments and good business practices.”

A YouTube video shows him paying cash for a Lamborghini Huracan Avio. His Audi R8, which he has since sold, was wrapped in green vinyl film emblazoned with the dispensary’s company name: Living On Inc.

Under Ontario law, officers must receive a force’s permission either to have a second job or to have ownership in a company that may appear to be a conflict of interest or interfere with their duties.

Edgar’s application, submitted in November 2015, was sparse, the OPP report says. It did not list his business partners or include copies of licensing information from Health Canada, which regulated medical marijuana vendors, the OPP said.

Stan MacLellan, Durham’s chief administrative officer and a friend of Edgar’s, said he would handle it, the force’s human resources director told the OPP.

MacLellan told OPP investigators that he instructed the force’s HR manager to make sure Edgar understood “everything has to be covered off … because we are not authorizing something that couldn’t be legit.”

No one involved with reviewing Edgar’s request ever saw his company’s supposed licence to sell medical marijuana, the OPP said, because “a valid licence did not exist.”

Edgar previously told the Star that it was his understanding that Living On had all the necessary licences. He said he was only involved in the company’s promotional side while a business partner handled the regulatory matters.

Confirming whether Edgar’s business had a licence would not have been be difficult. Health Canada’s website listed all the companies that could legally grow or sell medical marijuana.

In a statement, a lawyer representing Chief Paul Martin, MacLellan, and law firm Johnstone & Cowling, which provided the legal advice, said it’s an officer’s obligation to ensure he complies with “all applicable regulations before operating a business.”

Ian Johnstone, in written responses included in the OPP report, said the information received by his firm was that Edgar had the proper licensing and the legal opinion was based on that. He said that it wasn’t his firm’s job to “‘investigate’ facts received from our client.”

Johnstone told the Star through a lawyer that he was unable to comment on the firm’s advice because it was subject to lawyer-client privilege.

Inside Durham police, concerns mounted about the approval of Edgar’s request. One superintendent told the OPP that a background check showed one of the dispensary’s co-owners had a criminal record, which might have put Edgar in violation of a Durham police rule that officers cannot associate with criminals.

Around that time, on the streets of Oshawa and Whitby, Durham police started cracking down on the illegal storefront dispensaries that had cropped up. Over the next few months, officers raided some of the illicit shops, arresting the employees on drug charges.

Police Chief Martin had a special request for the officer in charge of criminal operations, according to the OPP report: The chief must be told before any raid or criminal investigation into Edgar’s dispensary, Living On.

“The chief has asked me to ensure that, prior to any proactive enforcement conducted by our service in relation to Living On Inc and/or its agents he be briefed personally,” said the email from a Durham police inspector to a superintendent in charge of criminal operations, quoted in the OPP report.

“This request is not meant to stop or impede any investigation that may be ongoing or commenced in the future by our members,” the email says, adding that the chief will make himself available even if he’s on vacation.

In a statement, a lawyer representing Martin said the chief is routinely kept abreast of developments in significant investigations.

“This is what one would expect of any chief of police. He has not improperly involved himself in, or interfered with, any investigation at any time,” the statement says.

Edgar dismisses any suggestion that Durham police management — including his friend, MacLellan — have shown him any favouritism.

“I’m still a constable at the bottom of the food chain. If Stan was my friend and people are saying there is nepotism, well, I should be an inspector by now,” he said.