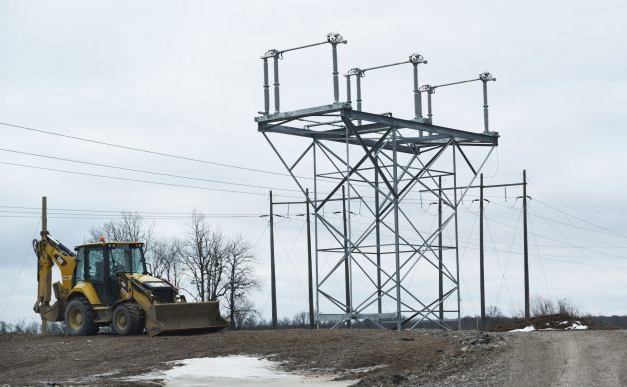 From theturtleislandnews.com link to article by By Lynda Powless and Justin Lethbridge

SIX NATIONS OF THE GRAND RIVER-The Six Nations Grand River Development Corporation (SNGRDC)
says it is sending its A6N – Back to Work construction company, A6N, back to work Monday on the stalled Niagara Reinforcement Line (NRL) after Hydro One Networks rejected a proposal from the Haudenosaunee
Confederacy Chiefs Council (HCCC)
Communications o􀂨cer Tabitha Curley said OPP have been apprised of
the plan.
“As Staff and Community Safety are our number one priority, the OPP is aware of the Back to Work
date, time and location and will respond accordingly, in addition A6N regular security company will also
be resuming work on that date. “ She did not say if any Six Nations protesters would be charged.
Curley sent out a notice late Friday seeking support for SNGRDC’s plan to have staff from Six Nations
owned business under the directorship of the corporation on site. The SNGRDC oversees all of Six
Nations revenue generating business from the hugely pro􀂦table Six Nations Bingo to the administrative
staff, the Gathering Place banquet hall, all tourism activities to greenhouse projects and green energy
projects.


In the statement Curley said “On behalf of the Niagara Reinforcement Line Project (NRL) we would like
to invite you to join us in supporting A6N as they go Back to Work. As you know, the NRL will bring
substantial bene􀂦t to the Six Nations Community for many years, and it is important to celebrate the
role that all parties played in this success.
She said they will be on site throughout the day.
“We will be gathering at the Access Road on the Hwy 6 bypass on Monday, April 29 , 2019 at 11am.
We intend to maintain a presence at that location until 4pm that day, and will have a range of activities
and information available for all attendees. From that day forward, A6N will be onsite at the NRL until
work is completed. This will ensure the Six Nations Community receives maximum bene􀂦t from the
project. “
In an interview with Turtle Island News Curley said Hydro One had been in talks with the HCCC. She
said the project was originally halted out of respect for the HCCC.
“When SNGRDC instructed its subsidiary company, A6N, to temporarily halt work on the Niagara
Reinforcement Line Project (NRP) it did so out of respect and courtesy to allow time for HCCC to
engage directly with Hydro One Networks Inc (HONI) regarding the NRP. The project has now been
paused for over 3 months which has resulted in the community losing substantial bene􀂦ts – including
employment, resources and pro􀂦ts.”
She said that multiple meetings took place between Hydro One and Confederacy representatives and
that a counter-proposal was made by the HCCC.
Curley said that the HCCC proposed that Hydro One abandon their partnership with the SNGRDC and
the Mississauga’s of the Credit First Nation and enter into a new agreement solely with the HCCC to
complete the line. Instead she said that Hydro One voiced their commitment to honour their previous
relationships.
She said the SNGRDC has not been in talks with the HCCC.
Curley said that when A6N returns to work on the project, there will be safety measure in places.
” As noted previously, when A6N returns to work on April 29, 2019 there will be thorough safety
inspections completed. Any concerns will be addressed immediately. The project site will be secured
by A6N, with support of private security, off-duty police, contractors and the OPP. ”
Work at the NRL was stopped on January 21st, 2019 after HCCC representatives delivered a cease and
desist letter to Hydro One. On their monthly newsletter, the Six Nations Elected Council reported that as
of March 1st the stoppage had added $1 million in project expenses and will add an additional $93,000
each month it remained stopped. At the time of the stoppage SNGRDC reports that there was
approximately two-to-four weeks of construction work remaining on the project but Curley said the
stoppage will result in a longer timeline until the project’s completion.
“Due to the work stoppage and demobilization of the project site, the NRP will have to be re-mobilized
prior to construction resuming. This is anticipated to take approximately one month. Re-mobilization
includes conducting safety inspections, grading access roads, securing and delivering equipment
rentals and construction materials. Once the site has been remobilized, construction is expected to
take four weeks and an additional month to complete 􀂦nal safety inspections on the line before it
transferred to HONI to become operational.”
She said citing the substantial bene􀂦t to the Six Nations Community the SNGRDC has made for many
years, the corporation is asking for community members to support A6N as they go back to work. The
SNGRDC say that they will be maintaining a presence at the access road to the NRL project site at the
Highway 6 bypass on Monday April 26th, 2019 at 11:00 am and will remain until 4 pm.
SNGRDC also said they will be on site until the NRL work is complete so that they can ‘ensure the Six
Nations Community receives maximum bene􀂦t from the project’.
It is not yet known how the HCCC will respond to work being continued on the NRL or with OPP, private
security, off-duty police constables and SNGRDC staff and supporters on hand when work does
resume. The HCCC has not responded to requests for comment.