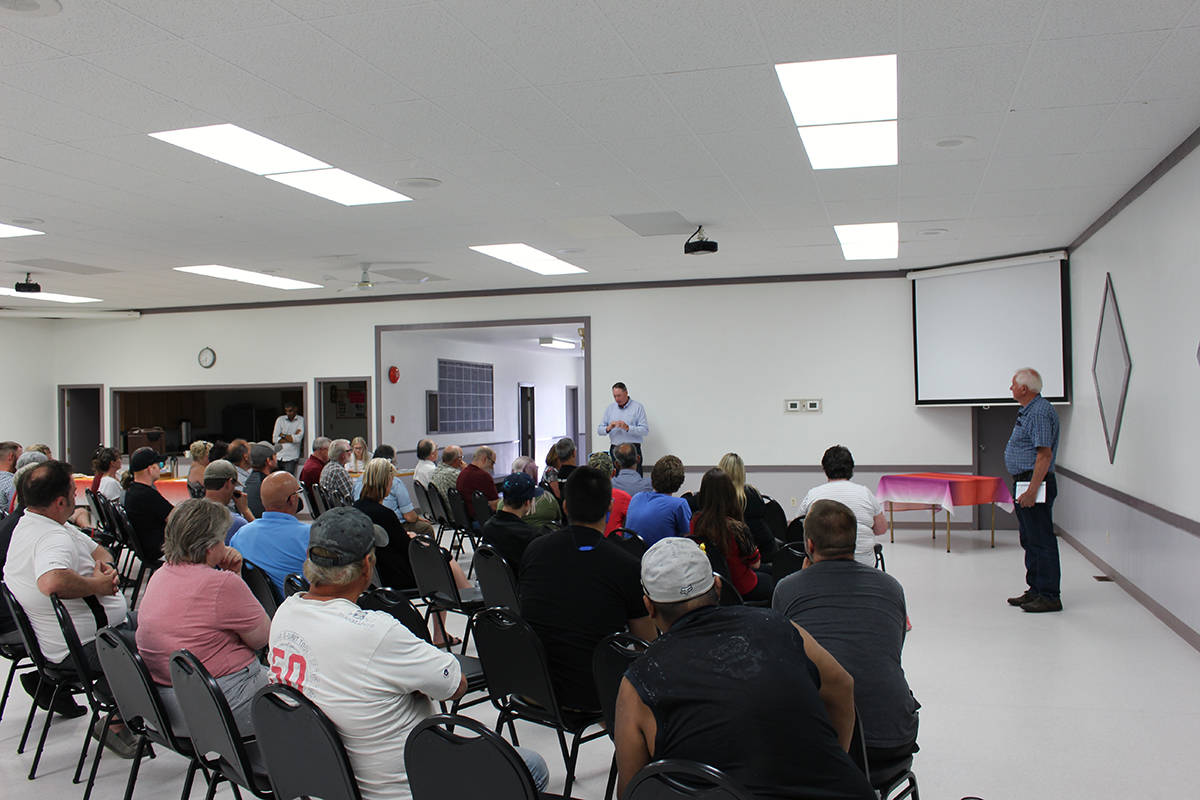 Nearly 50 residents of Vanderhoof and the Saik’uz First Nation made their way to the Senior Friendship Centre to engage in a public discourse surrounding the legalization of non-medical cannabis.

In terms of national news, the legalization of cannabis for recreational use, as well as the current restrictions on medicinal use being lifted has been a hot topic in recent weeks.

On Oct. 17, 2018, every Canadian adult — over 18 or 19 years of age depending on their respective province — will be able to purchase cannabis legally.

Government controlled websites, run by the BC Liquor Distribution Branch in British Columbia, will be up and running on October 17, but the Cannabis Community Consultation meeting provided some information as to whether there would be a physical retail location where locals could purchase cannabis.

“I will tell you now that I don’t believe there will be a retail store ready in Vanderhoof ready on October 17, but legalization will happen on that day across Canada,” said Frenkel.

“In the case of a retail model, Vanderhoof is looking at the options of no retail cannabis, a government-run retail, a privately-run retail or a combination of both,” said Frenkel. “In the early days of the federal government saying that cannabis would be legal, we as council were leaning towards a government retail.”

Frenkel stated that a lot of rural British Columbia is looking at the government retail model. From the public in attendance, there was a mixed reaction to this potential decision, with some stating that a privately run business would be more community-driven than a government run store. On the other hand, some stated that the provincial government-run model would streamline the process and alleviate any worries when it comes to local bylaws.

Ultimately, regardless of how the District of Vanderhoof and the Regional District decide to approach the impending legalization and the subsequent retail offerings of cannabis, the Province has made it clear that adults will be prohibited from smoking and vaping cannabis in numerous public places.

From playgrounds to community beaches and school properties to restaurant patios, the fear of heading out for a day with your family and encountering cannabis on every street should not be at the forefront of the legalization.

Regardless, Frenkel made it clear to the public that the legalization process is multifaceted and that this will be an ongoing conversation in the coming months.

“The legalization of cannabis is very complex,” said Frenkel. “There are eight ministries involved, from justice to finance to agriculture. They are trying to develop regulations that will appeal to all the jurisdictions.”

Manu Madhok, a representative for School District 91 Nechako Lakes was also present at the meeting, sharing an excerpt from a letter that will eventually go out to local municipalities.

Madhok made it clear that this was just a general overview of the School District’s position on the matter.

“We are thankful that the province of British Columbia, through the Cannabis Control and Licensing Act, has set 19 as the provincial minimum age to purchase, sell or consume cannabis,” said Madhok. “This helps to ensure that the K-12 students that we serve, all of whom are below the age of 19, are not able to purchase or consume.

“As a broad statement, we would suggest local bylaws need to support the existing school district policies, which are clear and consistent around the prohibited use of drugs and alcohol in and around schools.”

Madhok continued by stating some of the potential risks that students in the school district may be susceptible to with the legalization of cannabis in the fall, while imploring that there must be further education provided for youth.

“Students may have increased exposure and access to cannabis and our collective ability as a community to respond and to communicate the dangers around cannabis use is paramount,” said Madhok.

Madhok finished his presentation by stating that School District 91 Nechako Lakes is looking forward to further discussion on the topic.

“Clearly the use of marijuana has become a very popular item among the population in general, especially in the last year or so, “said Dhillon. “From a medical perspective, the studies are being done and a lot of these benefits or risks are being looked at in much more detail, down to a micro and molecular level to see what are some of the medical benefits that the general population seems to attest to.”

Dhillon explained that there is some anticipation, after taking into account statistics from Colorado — which has had decriminalized marijuana since 2012 — that there will be more emergency room visits from cannabis use.

Whether that be from cyclic vomiting syndrome or the range of psychotropic risks that come from the use of cannabis, Dillon explained that Northern Health will be ready, as well as stating that there will be further doctor education on the topic.

“As a whole, from a Northern Health perspective, we will continue to do what we’ve been doing,” said Dhillon.

“There is work being done, federally and provincially both, in relation to driving and impairment,” said Harvey. “It continues to be done and there are a lot of details that still need to be ironed out, but there are fines set and jail time set.”

Harvey explained that the majority of these fines and repercussions will be similar to how driving under the influence of alcohol is treated, with infractions under the Cannabis Act mostly falling under a $200 fine.

Nonetheless, the majority of the local RCMP detachment’s concerns fall under the current lack of bylaw enforcement regulations and tools and the increase in fatal vehicle accidents as evidence from jurisdictions where recreational cannabis is already legalized have seen more accidents from cannabis impaired driver.

Mayor Gerry Thiessen was present and there were a few questions directed towards him and the municipality. Ultimately, Thiessen stated that the District of Vanderhoof is looking to find the “sweet spot” between heavy restrictions and light restrictions.

“We are going to be doing things a bit slower than what a lot of communities will be doing,” said Thiessen. “That’s the type of community that we are. If we totally ban it, my fear is that we will have no control over the use of cannabis in the community and that’s a real concern that we are looking at as a municipality.

Thiessen also explained that the public discussion was extraordinarily helpful and will be taken into account when going forward.

“On behalf on council, I believe we heard some really valuable information tonight,” said Thiessen.

Most of the public discourse, which remained constructive and respectful, was centred around safety, educating the community on the effects of cannabis and the private versus public retail model. Councillor Frenkel stated that these are all top priorities for the Government of B.C.

“The Province’s top priorities, from what they have stated so far, are protecting children and youth, promoting public safety, keeping the criminal element out of cannabis, keeping roads safe and supporting the economic development in British Columbia,” said Frenkel.

Later this summer, federal and provincial advertisements will be running to inform the public about the legalization of cannabis and what it will entail.

There were many other details shared at the Cannabis Community Consultation meeting. Both Frenkel and Thiessen made it clear that the discussion around cannabis in the community is not over, but rather this meeting being the first step in which the public were able to voice their opinions or concerns.