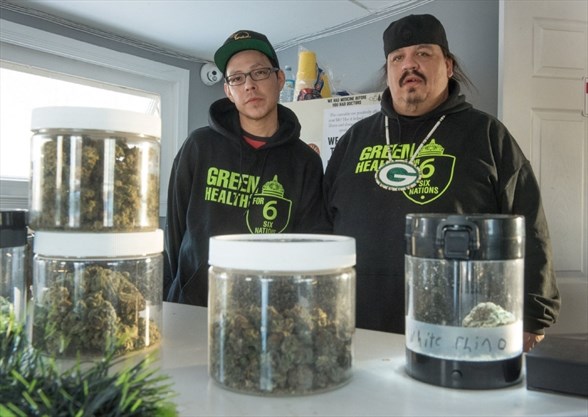 OHSWEKEN — If you ever thought the legal pot thing would go down nice and mellow anywhere, from Salt Spring Island to St. John’s, or Six Nations in between, what were you smoking?

Case in point. Sunday’s gathering at Yogi’s Barn, 2318 Chiefswood Road, Ohsweken, to discuss the results of a recent survey about cannabis use and regulation in the Six Nations community.

The survey in question shows massive support (in the 80 to 90 per cent range, based on answers from 731 respondents) for the availability of marijuana in their territory and for the “sovereign right” of the Six Nations people to “determine their own path and choices regarding cannabis.”

The meeting, attended by about 40 people, was convened by Jeff Hawk, owner, and Aaron Sault, manager, of Green Health For Six, the cannabis dispensary (raided by Six Nations Police Jan. 9).

They not only commissioned the survey, but worded the questions and sent out the questionnaires (through a random post office mailing on the reserve and, it seems, among some New Credit people). Then they compiled the results.

According to the survey, 88 per cent of respondents use marijuana, 72 per cent on a daily basis.

“Even a majority of those who don’t consume still believe marijuana should be on the reserve for medicinal purposes (94.9 per cent). And a little less (86.4 per cent) favour it for recreational purposes,” said Sault, who outlined the results to the gathering.

Most at the meeting seemed to favour the findings of the survey. But hardly all.

During the long question period after the presentation, Barb Smith, who lives in Ohsweken, asked, “How many New Credit? The survey was mailed out to both.”

Sault promised he would email the information to her later.

Audrey Hill, also of Six Nations, said: “There are flaws in the survey, and your data is sometimes mixed and obscured. If you do a survey, you should do it well. But it’s a good start. My hat’s off to you.”

Hawk, the dispensary owner who led the meeting, argued that the survey demonstrates the will of the people. He praised the medicinal and recreational virtues of marijuana, and also questioned why a methadone clinic is allowed to operate on the reserve when it is, according to Hawk, not wanted. And yet marijuana, which according to Hawk iswanted, gets blackballed.

“I’m a healer, not a dealer,” Hawk told the gathering.

The meeting went sideways at one point when marijuana activist John Turmel inflicted a self-aggrandizing lecture on those gathered, about how to deal with the courts, capped by a sales pitch for his $2 legal kit. Hawk had to ask him to relinquish the microphone.

Some, while sympathetic, suggested Hawk and Sault were, in effect, preaching to the choir.

“Maybe we should have a meeting for those against it (marijuana on the reserve),” said Jim Windle. “Maybe knowing who is putting this on, they might have stayed away.”

But some marijuana opponents were there.

“I’m against it,” said David Bomberry. “I’m against all of it. I don’t think it’s OK for Native people. You say it’s part of (traditional) medicine, but it’s not part of anything. It doesn’t grow here; you have to plant it.”

People at the meeting discussed what might be the shape of taxation and regulation. According to the survey, most think cannabis consumption should be regulated “by traditional medicine people, according to Haudenosaunee custom,” with the next most popular option being “an association of Indigenous cannabis retailers.”

Despite the mainly pro-marijuana consensus at the meeting, several acknowledged that, regardless of what the survey shows, the elected council and the traditional hereditary councils will have to be brought in to the debate, as will elders and traditional healers, some of whom worry that marijuana is a “mind-changer.”

The meeting probably left no one with a clear sense of where the path ahead lies, but no doubt the debate, in Six Nations and elsewhere, will be a lively one.

Published in Reprint and Six Nations