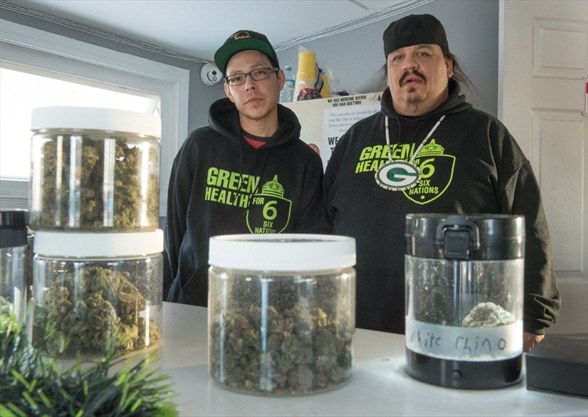 OHSWEKEN — As far as Jeff Hawk is concerned, his marijuana dispensary is filling a void in Six Nations.

Potentially deadly opiates are widely available, but safe, medicinal marijuana is not, says Hawk, owner of Green Health for Six.

“There ain’t really a large industry in pot anymore. That’s what I’m worried about.”

Hawk says his dispensary on Highway 54 just outside Ohsweken has a solid customer base for weed, edibles and oils.

Police haven’t broken down his door but have raided other local pot shops.

Elected officials are, however, taking a look at the future of cannabis, a council spokesperson said in an emailed statement.

“Six Nations Elected Council has and is continuing to conduct research regarding the legalization and regulation of cannabis, with plans to meet in the New Year to discuss and decide their next steps,” Victoria Racette wrote.

As it prepares to legalize pot, the federal government hasn’t yet announced an approach to regulation on First Nations.

That is a “potentially complex issue” that could draw from various legislation including the Indian Act, said Maryse Durette, Health Canada spokesperson.

Durette said the only thing Health Canada could “definitely” say is Ottawa is committed to consulting closely with First Nations.

The government plans to finalize its framework for pot sales by Canada Day 2018, when legalizing legislation is supposed to kick in.

In Ontario, the LCBO will oversee marijuana sales through a subsidiary operating roughly 150 stores by 2020, the province says.

Hawk, 39, is cynical about the government attempts to regulate and “monopolize” the budding legal marijuana industry.

“There’s a way to do it so that we can keep our money in our territory.”

Aaron Sault, Hawk’s business partner, argues Indigenous people selling and using marijuana on their own terms is about shaking the ills of colonialism, including residential schools.

“We want a new way of doing things, not just some new things, but everything,” said Sault, 34.

Last month, the Assembly of First Nations said its members lack the information they need to be ready for the change, “including any positive and negative impacts.”

The AFN hopes to “define and launch our own cannabis-specific goals, policy and strategy” before July.

Hawk and Sault say they’ve put the question to the people themselves by mailing out 2,300 surveys on Six Nations.

The survey includes a variety of questions such as how often respondents smoke, if marijuana is “compatible” with Indigenous medicine, and whether consumption should be regulated.

Pointedly, it asks: “Do you think that Six Nations people have the sovereign right to determine their own path and choices regarding cannabis?”

Hawk and Sault say they’ve tried to engage Six Nations Elected Council about marijuana sales but have been shut out.

A few months ago, the partners tried to hold a public forum on the issue at the community centre but say officials locked them out.

Racette didn’t respond to a request for comment about the forum.

The Green Health for Six survey runs until Dec. 31, after which the partners plan to share its results.

Published in Green Health for 6, Reprint and Six Nations