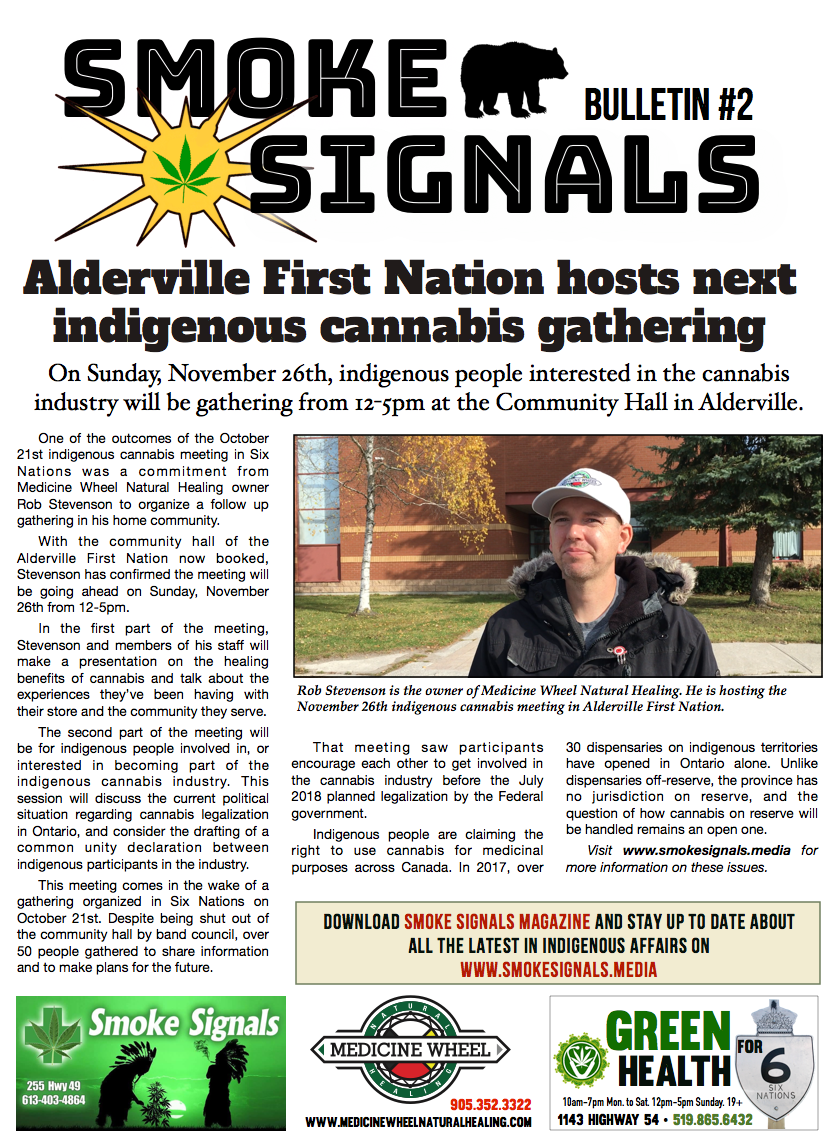 On Sunday, November 26th, indigenous people interested in the cannabis industry will be gathering from 12-5pm at the Community Hall in Alderville.

One of the outcomes of the October 21st indigenous cannabis meeting in Six Nations was a commitment from Medicine Wheel Natural Healing owner Rob Stevenson to organize a follow up gathering in his home community.

With the community hall of the  Alderville First Nation now booked, Stevenson has confirmed the meeting will be going ahead on Sunday, November 26th from 12-5pm.

In the first part of the meeting, Stevenson and members of his staff will make a presentation on the healing benefits of cannabis and talk about the experiences they’ve been having with their store and the community they serve.

The second part of the meeting will be for indigenous people involved in, or interested in becoming part of the indigenous cannabis industry. This session will discuss the current political situation regarding cannabis legalization in Ontario, and consider the drafting of a common unity declaration between indigenous participants in the industry.

This meeting comes in the wake of a  gathering organized in Six Nations on October 21st. Despite being shut out of the community hall by band council, over 50 people gathered to share information and to make plans for the future.

That meeting saw participants encourage each other to get involved in the cannabis industry before the July 2018 planned legalization by the Federal government.

Indigenous people are claiming the right to use cannabis for medicinal purposes across Canada. In 2017, over 30 dispensaries on indigenous territories have opened in Ontario alone. Unlike dispensaries off-reserve, the province has no jurisdiction on reserve, and the question of how cannabis on reserve will be handled remains an open one.

Visit www.smokesignals.media for more information on these issues.

As usual the PDF of the bulletin is available for download. Please print as many copies as you’d like! Smoke Signals Bulletin 2