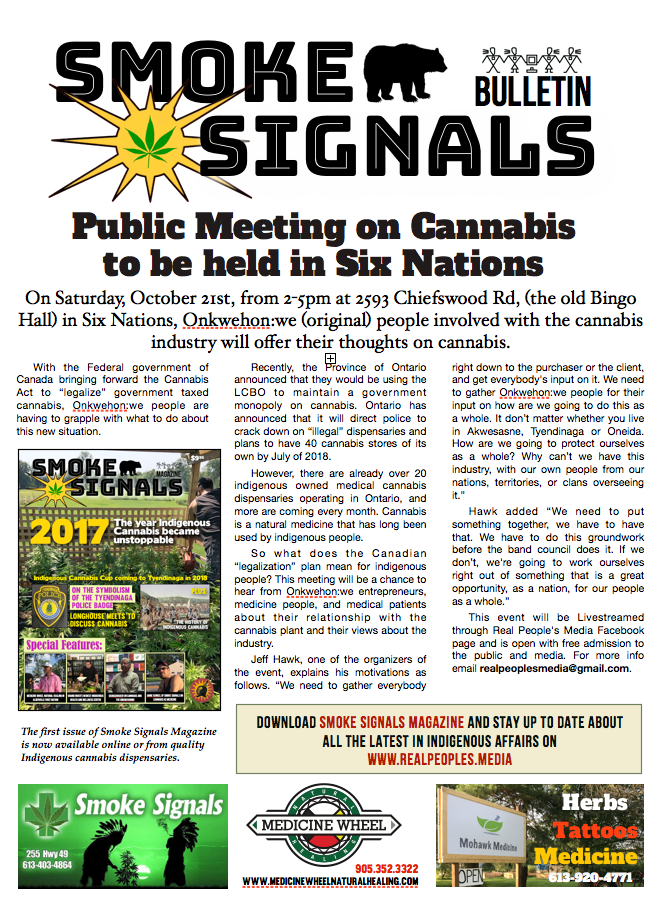 Public Meeting on Cannabis to be held in Six Nations

On Saturday, October 21st, from 2-5pm at 2593 Chiefswood Rd, (the old Bingo Hall) in Six Nations, Onkwehon:we (original) people involved with the cannabis industry will offer their thoughts on cannabis.

With the Federal government of Canada bringing forward the Cannabis Act to “legalize” government taxed cannabis, Onkwehon:we people are having to grapple with what to do about this new situation.

Recently, the Province of Ontario announced that they would be using the LCBO to maintain a government monopoly on cannabis. Ontario has announced that it will direct police to crack down on “illegal” dispensaries and plans to have 40 cannabis stores of its own by July of 2018.

However, there are already over 20  indigenous owned medical cannabis dispensaries operating in Ontario, and more are coming every month. Cannabis is a natural medicine that has long been used by indigenous people.

So what does the Canadian “legalization” plan mean for indigenous people? This meeting will be a chance to hear from Onkwehon:we entrepreneurs, medicine people, and medical patients about their relationship with the cannabis plant and their views about the industry.

Jeff Hawk, one of the organizers of the event, explains his motivations as follows. “We need to gather everybody right down to the purchaser or the client, and get everybody’s input on it. We need to gather Onkwehon:we people for their input on how are we going to do this as a whole. It don’t matter whether you live in Akwesasne, Tyendinaga or Oneida. How are we going to protect ourselves as a whole? Why can’t we have this industry, with our own people from our nations, territories, or clans overseeing it.”

Hawk added “We need to put something together, we have to have that. We have to do this groundwork before the band council does it. If we don’t, we’re going to work ourselves right out of something that is a great opportunity, as a nation, for our people as a whole.”

This event will be Livestreamed through Real People’s Media Facebook page and is open with free admission to the public and media. For more info email realpeoplesmedia@gmail.com.

The full PDF of Smoke Signals Bulletin 1 is now available for download. Feel free to print as many copies as you would like.