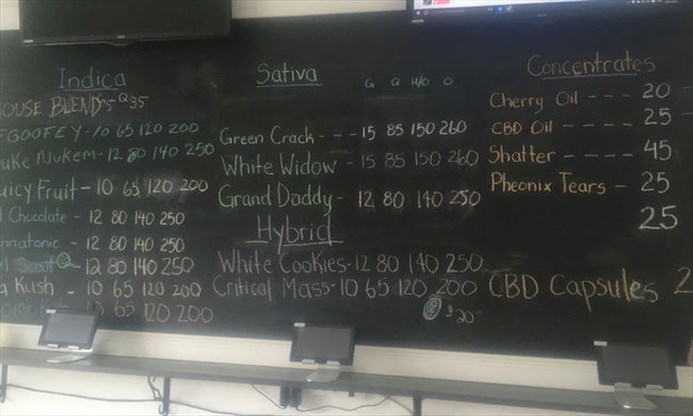 From thepeterboroughexaminer.com link to article, Aug 11, 2016

ALDERVILLE – A marijuana dispensary appears to be the first of its kind in Northumberland County.

The store is called South Shore Wellness – Full Service Cannabis Dispensary and is located at 8987 on Hwy. 45 in Roseneath.

The store has been open for approximately two months at the location and after a recent visit by Northumberland Today, it seems business is flourishing.

It is located in an area where there is another store which would be for this type of product including a hydroponic store.

A selection of various types of marijuana, including oil, pot and even cookies are available. At the time of the visit by this newspaper, the cookies were nearly sold out.

A quick glance at the menu posted on a blackboard lists a number of items including names such as White Cookies, Critical Mass, Cherry Oil, Pheonix Tears, Green Crack, White Widow, and Grand Daddy.

Alderville First Nation Chief Jim Bob Marsden said the store owner, who is not a band member, is renting the storefront from an Alderville band member.

Though they didn’t need permission, the owner of the store did approach council, who then checked his credentials.

“He’s fully legit and he’s got another business in Toronto,” Chief Marsden said.

In May and June, Toronto Police carried out Project Claudia which saw more than 90 people arrested and facing 186 charges as officers executed warrants at over 45 storefront locations.

At the south Shore Wellness location, when a person enters they are greeted and politely shown how to apply for an exemption with an Alderville Wellness Diagnosis Confirmation Form.

It is a two page form requiring information, including what conditions you may have been diagnosed with and currently require relief from.

“It’s perfectly legal,” Chief Marsden said. “He showed us his licence. We checked out his other business in Toronto and it’s a fully secured medical marijuana facility.”

Chief Marsden, though, was unaware if the business in Toronto sells medical marijuana.

Though the Alderville First Nation does support medical marijuana, they draw the line at recreational selling from storefronts.

“The recreation is going to be a whole different ball of wax,” he said. “For Alderville we’re doing a BCR (Band Council Resolution) against that type of business – recreation.

“Medical side is different than storefronts coming into First Nation for recreation marijuana,” the chief continued. “We’re against (recreation). We don’t want a bunch of store fronts popping up in Alderville.”

The resolution will be for a bylaw stating against the selling of recreational marijuana in Alderville.

But for the medical side of things, Chief Marsden and Alderville First Nation support it as they’ve researched it and read testimonials.

A phone call expected from the owner of South Shore Wellness to comment about the store hadn’t been received at press time Wednesday.