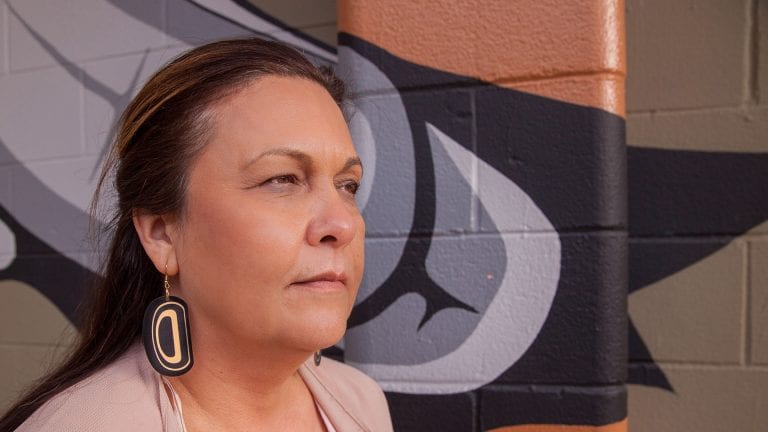 ‘How are they going to feel safe?’: Kackaamin healing centre rallies against cannabis facility

Those running a healing centre for Indigenous families are concerned that a huge cannabis production facility set to be built across the street will threaten the holistic support they’ve been providing for twelve years.

Kackaamin Family Development Centre has been operating just outside of Port Alberni, B.C., since 2009, and offers therapy for families who have been affected by colonialism, including the intergenerational impacts of residential schools.

Kackaamin (pronounced ‘cots common’), means ‘butterfly’ in the Tseshaht language — a symbol of the transformative work being done at the centre, says director Lisa Robinson.

Their services include counselling, cultural healing sessions, childcare, and educational workshops on subjects such as coping with loss and substance abuse.

“Our mandate is to bring families together and work with the whole family, looking a little deeper and addressing the trauma that’s connected with addiction,” Robinson tells IndigiNews.

Robinson is originally from Hesquiaht Nation, and married into Ahousaht Nation, she says. She received her master’s degree in social work through the University of Toronto’s Indigenous Trauma and Resiliency program.

She says she wanted to understand and learn about how to work with healing trauma and trauma-based addictions, because she knows intimately the damaging intergenerational effects of the residential schools.

“I grew up in Hot Springs Cove until I was five, then I went to Christie Indian Residential School. I was there for five years, until my mom moved to Port Alberni to probably get us out of there,” Robinson says. “It was not pleasant in residential school. For me, my mom, and my dad.”

Kackaamin treatment centre aims to support whole families understand how they have been affected by colonial disruption, and how they can come back to their own Indigenous ways of knowing, Robinson says.

“We knew — our Elders knew — that things weren’t getting processed, and people were carrying stuff they couldn’t talk about, numbing it out through drugs and alcohol,” she says.

To do this work requires safe space and sensitivity as people transform their lives, Robinson says. Now, that critical work is being threatened by an imposing marijuana facility slated to be built across the street, she says.

“If I visualize that place there … It would not be an area that’s comfortable or safe for families that are recovering from horrible events, traumatizing events in their life, people who are trying to recover from addiction,” she says.

Kackaamin treatment centre is located on a quiet country road, surrounded by family homes and small farms just outside of Port Alberni in a town called Beaver Creek, on Vancouver Island.

IndigiNews reached out to Premium Cannabis Meds BC several times requesting an interview with the proponent of the cannabis facility, but did not receive a response.

The company’s website says it hopes to create economic growth in the community, as well as new jobs and training opportunities.

“Our goal is to set the stage in Port Alberni as a hub for one of the largest exporters of medical cannabis production–recognized both nationally and internationally,” the website states.

Since the operation was first announced in 2017, the Kackaamin community has been stating their opposition to the project’s location. A key issue is the smell it would generate, Robinson explains.

“We have a huge issue with addicted families here too, with marijuana, despite what people are trying to say, because it’s legal, it’s still an addiction for some people,” she says.

Kackaamin treatment centre has a fully accredited school for K-12, and a licensed day care to support families during their healing journey. The daycare would be the closest to the marijuana facility. Robinson says they are concerned especially with the impacts of the project on the young ones.

“They’re supposed to be in this safe place. And even kids, they can associate that smell with things that aren’t safe, not good, there’s things going on in the home, they’re not being cared for. And that smell is going to bring them back to that place of feeling,” Robinson says.

“How are they going to feel safe?”

A call to action

Robinson is not alone in her concern. Beaver Creek community members are also protesting the location of the cannabis facility, expressing their concerns in a parliamentary petition.

Gord Johns, MP for Courtenay-Alberni, has sponsored the petition, asking for 500 signatures by June 18 in order for Johns to present it in the House of Commons.

Once the petition is brought to the federal government, they have 45 days to respond.

“Kackaamin is doing the work of healing from our shared history of colonialism and residential schools,” reads the petition.

“Kackaamin was never consulted in the initial planning of this facility, and has requested that this facility be located elsewhere.”

The petition calls upon Health Minister Patty Hadju to cancel all open and pending cannabis licenses and applications at the Beaver Creek Road site.

The file is still open with Health Canada, which means they have the authority to stop the license before construction begins.

The petition also calls on Hadju to “acknowledge the implicit racism in the policy choices of Health Canada’s cannabis licensing process and handling of this file.”

“The Minister of Health has a responsibility to listen to the concerns being raised and to make changes to the system to ensure decisions are made with appropriate considerations for this facility’s impact,” Johns says.

IndigiNews reached out to  the Ministry of Health for comment, but did not receive a response.

Kackaamin treatment centre Director Lisa Robinson says the important work that happens at the family treatment facility is threatened by the construction of a marijuana facility slated to be built across the street. Photo by Emilee Gilpin

The signatures represent a cross-section of the community, notes Robinson.

“In all these public meetings that they had, there were people from all walks of life,” says Robinson. “They had solutions, to find a more suitable location.”

‘Another way to say we don’t matter’

Community members formed a task group to bring this issue to the attention of Alberni-Clayquot Regional District’s (ACRD) municipal government two and a half years ago.

In Feb. 26 2020, a bylaw was established to prevent cannabis facilities from being built near schools or daycares, but a grandfathering clause was included that allowed the Premium Cannabis Meds BC proposal to be exempt. This meant the Beaver Creek facility was allowed to continue the process towards licensing.

Robinson says she finds it strange that the need for a bylaw was recognized, but that the facility that moved community members into action remained exempt.

“This is just another slap in the face. This is another way that says we don’t matter, we’re less than human. We don’t have rights,” she says.

IndigiNews made multiple requests for an interview, but did not receive a statement from ACRD.

Patrick Canning is a lawyer working on behalf of the community members and Kackaamin against the marijuana facility. He says he knows about the transformational work happening at the centre through his experience in criminal law for the region.

Canning says it’s important to recognize “the incredibly important work Kackaamin is doing and how the government has abandoned them.”

“Many of my clients enter the criminal justice system at a young age,” says Canning. “They’re dealing with the long term impacts of colonialism and residential school.”

When they are ready for change, clients ask for Kackaamin. Canning never sees them again, which is the goal, and a testament to the effective approach, he says.

West Coast Environmental Law describes environmental racism as “the racial discrimination reflected in environmental policies, the enforcement of laws and regulations, as well as the targeting of Indigenous, Black and communities of colour as sites for harmful development, the sanctioning of pollution, and exclusion of those communities from leadership and decision-making.”

Environmental concerns include the property’s location in a sensitive riparian zone, as a fish-bearing creek runs along the property, which is over 70 per cent wetland.

“It’s near a fish bearing stream, it’s not an industrial area. And the environmental study that they did recommended against it,” says Robinson.

The study was commissioned by Premium Cannabis Meds BC, and in the final line of the conclusion it recommends the cannabis production industry as “better suited to non-ALR zoned lands, such as light Industrial zone.”

The Agricultural Land Commission (ALC) have said they are not required to look into any environmental assessments when giving approvals for farming licenses, or in this case, an exemption, Canning notes.

The attraction is the lower cost of ALR property, compared to industrial zoned properties. This has left the ALC to navigate how cannabis facilities fit into the ALR objectives, to protect valuable farmland across BC.

Health Canada’s process is to allow a proponent to construct the building. After it is built, they review the license application to determine if they would license it. Health Canada more recently announced that the security certificate would also be reviewed after the facility is complete, says Canning.

The security certificate is also reviewed after the facility is complete, says Canning.

“The minister has the power under the act to review both the security certificate and the license application at any time — they could do it today,” says Canning. “They’ve agreed with that, when we confront them with it, ‘yes, we have the power to do that, but we’re not going to, we’re going to do it all at the end’.”

“The government will often say, ‘We don’t have any power. We can’t do anything. Our hands are tied’-  and it is not true in this case, they have lots of options,”  says Canning.

At Kackaamin, Robinson hopes the decision can be changed, so the good work can continue. She hopes the municipality will revisit the grandfathering to allow this site, and that Health Canada will review the license and security certificate before the structure is in place.

“Rethink that and just make it fair. They made the bylaw. Why couldn’t we be included in that? We want to be included, as people that matter too,” Robinson says.

The hurdles have added stress and uncertainty at Kackaamin, but she doubles her energy for the families they support.

“I’m trying to continue on with the work we’re doing with the families. The families that come to us are really beaten down too, in so many ways are some of the most vulnerable,  and we help to get them on their feet, you know? So we have to give our energy to that.”