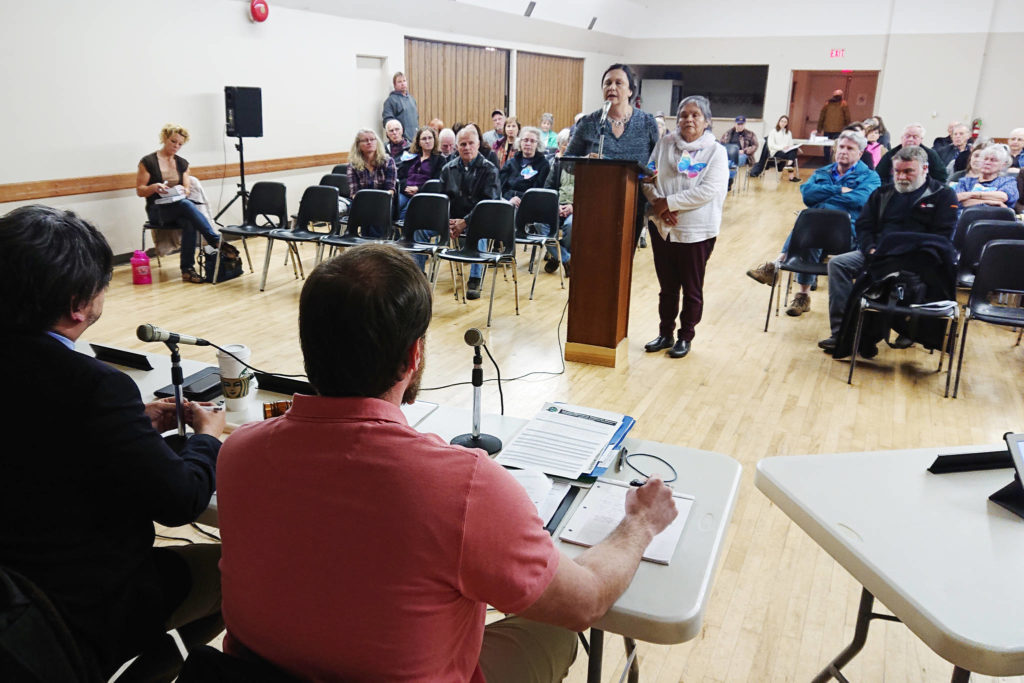 Beaver Creek residents are pleading with Alberni-Clayoquot Regional District (ACRD) directors to prevent a medical cannabis production plant from setting up across the road from an Indigenous healing centre, school and day care.

To no one’s surprise, a public hearing Tuesday, Feb. 18 at Cherry Creek Hall on tougher zoning restrictions for future cannabis production instead became a platform for complaints about existing grievances.

“It’s mind boggling that it’s got to this point,” said Sherry Lyons, an Alberni Valley farmer and part of a group that fought off another proposed cannabis facility last year. “I can’t understand why the board would even consider this.”

“Why has the ACRD shown such reluctance to protect the community of Beaver Creek,” Mike Steinbach asked.

Neighbours have fought the project for two years without success while the regional district maintains its hands are tied because Premium Meds got in under the wire before regulations could be tightened.

“We’re changing the rules now, but they’re not retroactive,” said John Jack, ACRD board chairman. He warned of legal consequences if the board were to retroactively block the project. “We are working under the guidelines and with the powers that we have.”

Emotions ran high at times and some speakers called for John McNabb to resign as Beaver Creek area director on the board.

“What I’m thinking is that somewhere along the line you guys have screwed up,” said Nicole Steinbach.

Another opponent of the project, Carolyn Thibodeau, suggested the board amend the new zoning restrictions to prevent the project from being “grandfathered.”

Lisa Robinson, executive director of Kackaamin, said the looming prospect of a large cannabis operation next door has been stressful for the centre. The one consolation has been community support rallying around them, she added.

“It feels like we don’t matter,” Robinson told directors. “It’s going to harm our ability to do what we’re doing. I don’t believe you don’t have the power.”

Kackaamin and MP Gord Johns have written to federal Health Minister Patty Hajdu and others — including Premier John Horgan and B.C. Health Minister Judy Darcy — asking that the minister intervene. Health Canada told Robinson it has not seen Premium Meds’ application, although the project proponent has indicated she obtained a medical cannabis licence.

“My feeling is, they’re not going to let this thing go through,” Robinson said.

Phyllis Rossignol, a Beaver Creek resident, told the board she feels angry and helpless due to strong and persistant odour from a designated medical cannabis grow operation next door. She said the regional district advised her to complain to Health Canada while Health Canada sent her back to the ACRD, insisting it is not their jurisdiction.

“This has created real and significant issues for neighbours,” ACRD planner Alex Dyer acknowledged. “The ACRD has tried to engage with Health Canada,” he added, citing “the aggregate of personal and medical licences without the ability to enforce lot size or minimum setbacks.”

Doug Holmes, ACRD chief administrative officer, said they have written a formal complaint to Ottawa “because obviously this situation is unacceptable.”

Another resident, Wayne Smith, held out Comox Valley Regional District as a possible example to follow. The CVRD has prohibited cannabis production facilities until it can amend its official community plan to deal with them, Smith said.

Enacting a nuisance bylaw could help ACRD to enforce rules around odour, noise and lights.

“Enforcement is the kicker,” Jack said. “We can put pressure on them and we can remind the federal government to do their job.”

Jack indicated that the board’s understanding of the issue has grown since community concerns arose two years ago. He also suggested they would have counsel examine Thibodeau’s suggestion to reword zoning restrictions so they apply to Premium Meds’ project.